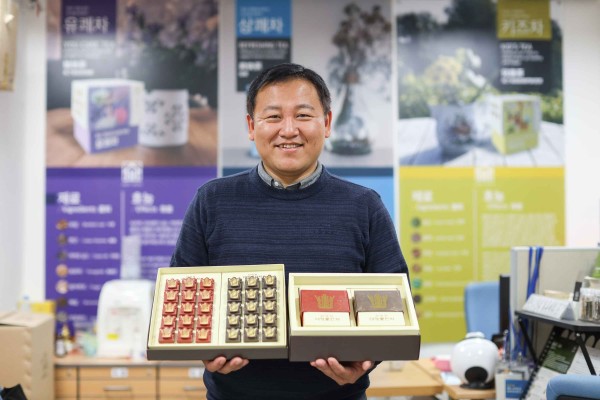 Andong, Korea – Agros, a company that develops a variety of harmonious herbal blended teas, has started expanding into the global market to broaden its aspirations.

Agros CEO Kwon Ki-han specializes in medicinal crops. He wanted to use his major to make tea for frequent hangovers, so started taking advice from an Eastern doctor he knew and opened his first business called Happy House in mid-summer 2017.

He began to seriously develop products, and the following year he developed a total of five kinds of oriental medicine blended teas. CEO Kwon pointed out that this is a blended herbal tea made by Tisommelier himself; he won the grand prize of the 6th Industrial Startup Ideas Competition in 2018 with “Tea per Day”. It also won the Gyeongbuk Content Branding League Gold Award in 2019.

He also challenged cloud financing in which consumers invest directly on the condition of buying products. Wadiz, who funded the cloud, also praised the fact that it’s almost impossible to achieve so many results with tea products. It also won the silver award at the 2019 Agriculture and Food Demonstration Day, which collects and evaluates companies that have achieved financing results with agricultural products at the Agricultural Policy Insurance Financing Institute in because of their good fundraising results.

Happy House has become the current “Agros” by attracting investments from Angelo in 2020. Currently, Agros is developing cold brew tea with different tastes and aromas that simplify the tea making process and prevent the generation of bag residues Some tea.

Recently, Agros announced a partnership with CompanyA. CompanyA is a Daejeon-focused global accelerator that discovers first and early start-ups and supports domestic and overseas commercialization with personalized support for start-up incubation and enterprise aspects.

Through this program, Agros has taken steps to expand into the global markets of Southeast Asia, discussing the possibility of collaboration with various foreign companies and preparing thoroughly to bring innovation from cold brew tea in Southeast Asia.

Anthony D. Brice is pleased to announce the publication of his new book, Poor Me to Soul Rich