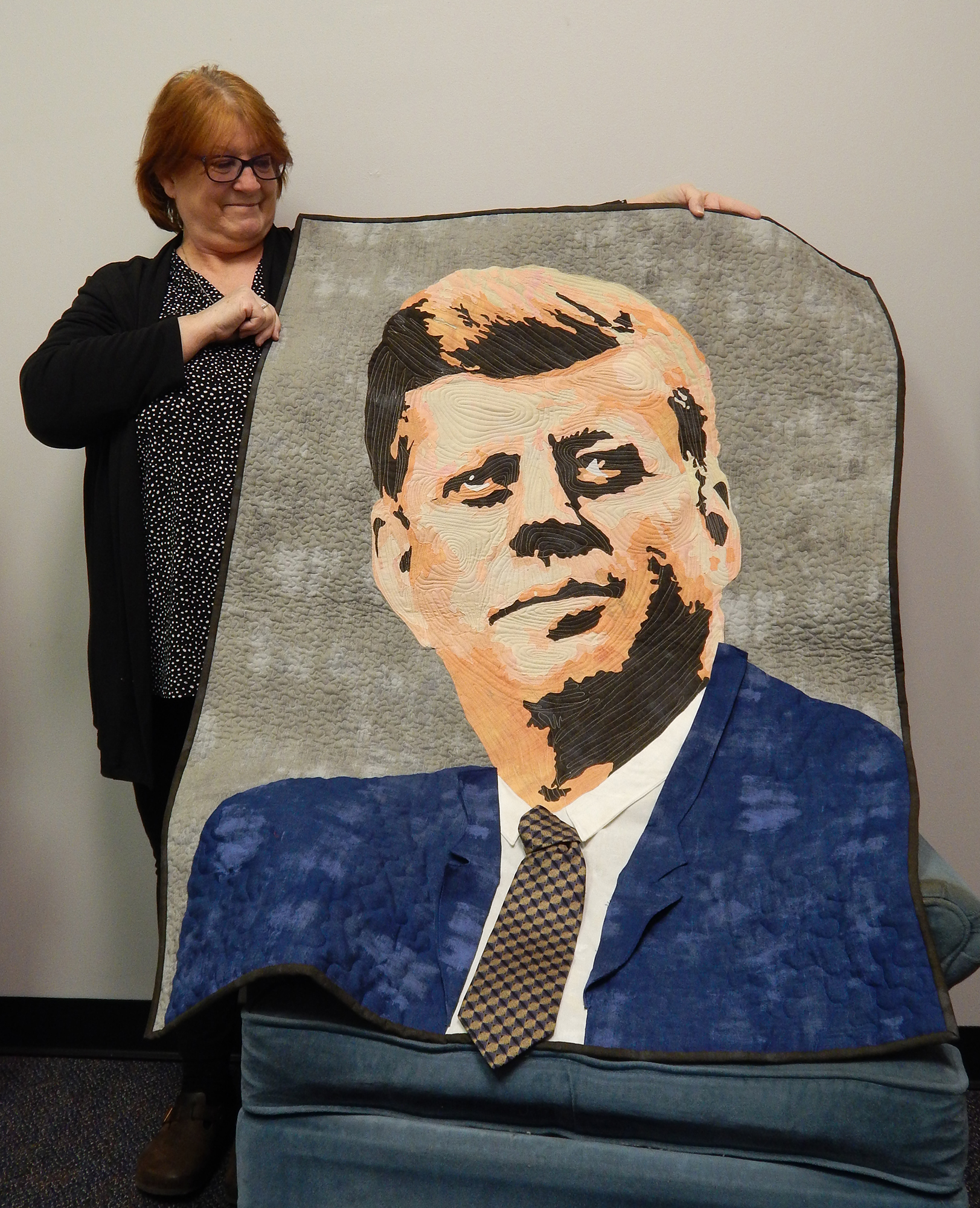 The quote on Chapin’s Rosanne Hamilton label sewn to the back of her latest quilt sums up the quilt itself – “Every achievement begins with the decision to try” – but the words of John F. Kennedy can also sum up his approach to quilt. the success she found in having her quilts accepted at national exhibitions.

His first to be accepted, “Mexican Tiles – Fiesta de Talavera”, was entered in competition at the 2020 American Quilter’s Society QuiltWeek show in February 2020 in Daytona Beach, Florida.

Her second is a photo quilt featuring a fabric likeness of Kennedy, which will be included in the AQS QuiltWeek 2022 show and contest from March 23-26 in Branson, Missouri. AQS shows and competitions are some of the most prestigious in quilting circles and attract the best of the best quilters from around the world.

“It was my first entry,” Hamilton said of “Mexican Tiles, which features appliqued pieces of shiny batik fabric against a black background. “I just wanted it to be good enough to be accepted. never thought I could win. I don’t really want to be that good.

And though, no, it didn’t win, Hamilton knew as soon as “Mexican Tiles” was accepted that she would try to get into her Kennedy quilt, which she was already working on. The two quilts are very different in appearance and approach.

“I love appliques and patches, but I’m more of an art quilter than a traditional quilter,” Hamilton said, noting that she plans to focus on other quilts in the future. Photo.

“The next one I will do will be at least twice as difficult as JFK,” she said. “I’ll do Frank Sinatra with the old Sands sign behind him.”

Hamilton’s photo-quilting process involves choosing her image — the photo she used for her Kennedy quilt is the one her grandparents saved for her, she said — then developing a pattern, almost like a coloring book picture.

Once she knows what colors she wants to use, she finds the appropriate fabric. Her current favorite is Moda’s “Grunge” line, and her JFK quilt is made entirely of Grunge fabrics, except for a vintage 1960s tie she added for a three-dimensional touch.

Then she begins to cut the fabric into the appropriate shapes and sizes. Once cut, it involves using a raw edge applique technique to sew the various pieces in place.

“The raw edge is completely sewn,” Hamilton said. “But it’s not something you’re going to wash and use. You are going to hang it on the wall like a photograph.

The idea of ​​layering and sometimes sewing together small pieces of fabric might not be fun for everyone, but it’s Hamilton’s happy place, she said.

“My husband (Loren) would tell you I’m in my little sewing room four nights out of seven a week,” she said. “The kids are grown…it’s my stress reliever.”

But only to a certain extent.

“If I had to make a 15-block Ohio Star quilt, I would be stressed out,” she said of the more traditional quilt pattern. “But I can sit down with a picture and that’s totally nice. … I finally understood after 61 years what I like to do.

In addition to enjoying making photo quilts, she also enjoys presenting them at AQS salons. She is already working on the quilt she plans to enter in 2023, she said.

“I want to apply regularly,” Hamilton said. “Every time you do that, it’s a learning curve. You go (to fashion shows), you see what the other quilters are doing. It sort of gives you areas that you personally know you need to improve on.

Hamilton also showed her JFK quilt at the AQS show in Paducah, Ky., in April and the ASQ show in Grand Rapids, Michigan, later this year, though she’s not sure if she was accepted at either. another of those shows until about a month before, she said.