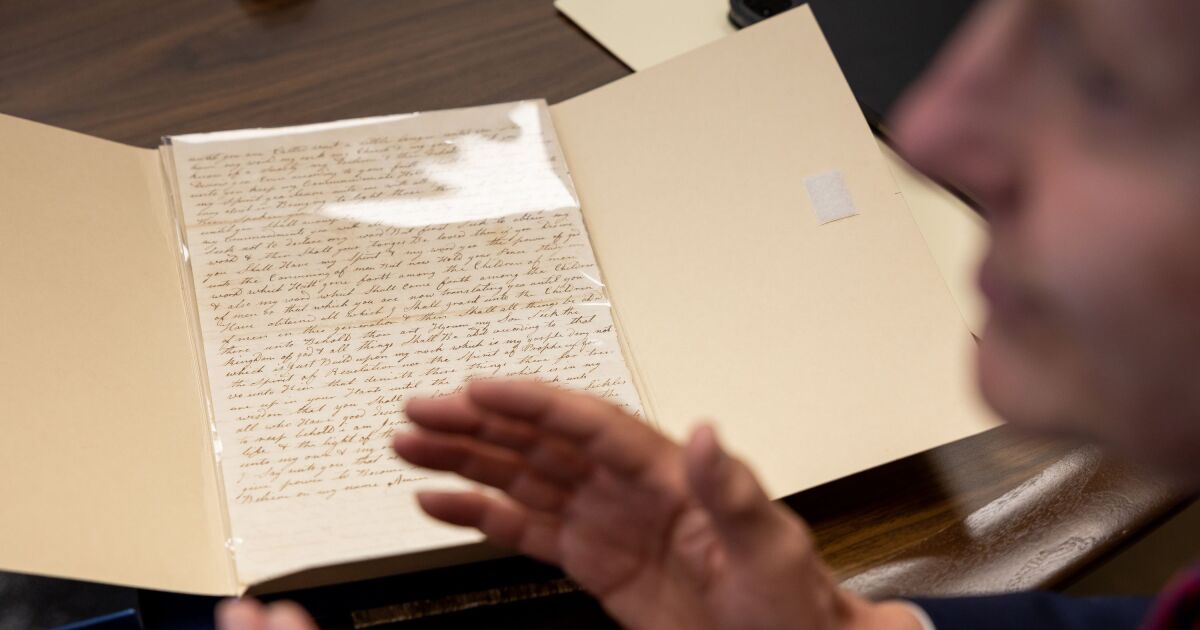 When the time capsule for the cornerstone of the Salt Lake Temple—the ball on which the Angel Moroni statue stands—was opened, Elder LeGrand R. Curtis Jr. was excited about what it could hold. It had been sealed for 128 years – from April 6, 1892 to May 2020 when it opened.

“We had a list of things that were supposed to be there, and we were really excited about the possibilities,” said Elder Curtis, a General Authority Seventy serving as Church Historian and Recorder and executive director of the Church. Church History Department. “On the one hand, he said there was a photograph of Joseph Smith. Well, there are no known photographs of Joseph Smith. So if there really was a picture in there, it would be a real find.

[Note: Since Elder Curtis’ statement, recorded in a recent Church News podcast, the discovery of a possible photograph of Joseph Smith has been made public.]

But the water had seeped into the temple’s time capsule, damaging everything paper.

The members of the First Presidency had wanted to see the time capsule opened. Brother Curtis said “there was a lot of mush in there, a lot of stuff, just stuff that’s been tampered with.”

But some things have been preserved.

“What’s curious, what went well, were the coins the workers threw into that time capsule,” he said. “So it’s kind of funny, the official stuff that’s been put in there hasn’t come out very well, but we have some interesting bits of history, with the pieces that have been put in there, including some that were specifically, specially engraved to be thrown in.

Based on these experiences with the time capsule and other historical artifacts, Elder Curtis explained how people can store important documents, photos, and artifacts in their lives.

The Church History Library has several storage vaults with environmental controls – 10 that are kept at the ideal temperature for keeping paper records and two that are kept below freezing.

While more people don’t have that kind of control over the conditions in their homes, Elder Curtis notes that people should be aware of where records are stored.

“Sometimes a very hot attic might not be the best place to store something or a basement that gets flooded from time to time, so it’s a really good thing for us to keep our records of so that they last a long time,” he said.

“We are migrating files to the latest technologies in order to digitize paper files; we are migrating recordings to more current types of technology,” Elder Curtis said. “It would be difficult if we left everything on reel-to-reel tapes.

While these tape drives are still available, “it’s much better if you can migrate them to a more available way of recording these things.”

Brother Curtis saw where people changed phones and lost their photos too. Saving digital documents and images in a central location is therefore valuable.

And don’t just assume it’s in an email and will never be deleted.

“Now the modern era gives us all kinds of challenges because we used to get all of our communications either just by talking to someone or on a piece of paper,” he said. “Now they are electronic in email systems where they are deleted after a certain period of time. And if we are not careful, we will lose treasures that will mean something to us later in our lives and for generations to come.

When organizing records, consider how documents, photos, videos, and other records are available to future generations from time to time, Elder Curtis suggested.

“Be wise about the records you keep and by that I mean, baptism records, or ordination records, or seminary graduation, high school graduation, key letters that we receive, have a way that we can, basically, keep some preservation,” he said.

Find a way to jot down details about photos – who’s in them, the event and date, etc.

“One of the other things that happens with photographs is that people take a picture at an important event, years go by and you look at it and say, ‘Well, I recognize Aunt Maude, but who are these other people?’” said Brother Curtis. “So a few notes about who he’s in the picture, or a little more detail. It’s amazing how things that you think you’ll never forget, you get a little blurry on some of the outer edges, some of the circumstances surrounding.

In addition to taking care of any family records people may have, “find a way to keep regular records,” Elder Curtis said.

There have been “great reporters” in the Church who have consistently written in a newspaper, such as Wilford Woodruff, who “had an entry for every day from the time he joined the Church until just time before he died,” Elder Curtis said. “It’s a tremendous resource for us.”

“But some people find they can’t write every day. So for some people it’s a Sunday activity to look back on the week and write down things that happened,” he said.

Also, when Brother Curtis was released as bishop, he noted in a small book some “end-of-term entries, like key people I had been involved with, big events that had happened and it’s funny to look back,” he said.

He said he tries to make these kinds of sketchy entries about a period of service or the end of a year and look back and say, “OK, these are some of the big events” that, otherwise get lost in the mists of memory that you think, ‘Well, how did that really happen?’ and, ‘Well, how did I feel at the time?’ “, he said. “I think capturing those kinds of experiences turned out to make a real difference.”

Another type of record that people contact the Church History Department for is of people finding the journal of a deceased relative and there are notes of the prophet at the time who was speaking to a group .

“We hid information in all kinds of places, because people bothered to jot down a note or note about a spiritual event in their lives,” Elder Curtis said.

Is the Danish king who gave his name to Bluetooth buried in Poland? – The newspaper