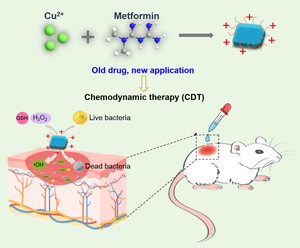 Old dogs may not learn new tricks, but old drugs can, according to a China-based research team. The collaboration revealed that metformin, a small-molecule drug that has been used to treat type II diabetes for more than 50 years, can improve the efficacy and effectiveness of antibacterial treatments for rapid wound healing in mice.

“Overuse of antibiotics has led to severe bacterial resistance, with an estimated 1.27 million deaths in 2019 from multidrug-resistant bacterial infections,” said co-corresponding author Linlin Li, a professor at the Institute of Beijing Nanoenergy and Nanosystems, Chinese Academy of Sciences. “Bacterial resistance poses a deadly threat to human health. Non-antibiotic antibacterial technologies and antibacterial nanoagents with specific catalytic activities not only produce toxic substrates to directly kill bacteria – including antibiotic-resistant bacteria – but can also reduce the risk of bacteria developing drug resistance.

According to Li, chemodynamic therapy has attracted considerable attention since its development in 2016 as a potential companion to cancer therapies, bacterial inactivation and infectious disease treatments. The therapy uses nanomaterials containing transition metals that react with hydrogen peroxide to produce a hydroxyl radical, which weakens and kills diseased or infected cells, making them more susceptible to direct treatment.

“The reaction generates a toxic hydroxyl radical, which destroys the cell surface structure and causes its internal components to leak out,” Li said. inflamed, so the therapy is highly specific in reducing off-target toxicity. Bacterial infections also tend to be accompanied by microenvironmental alterations favorable to chemodynamic therapy.

The researchers set out to improve the antibacterial potency of a nanoagent, while reducing toxicity to healthy cells – a risk that can be difficult to control due to the invasive nature of the infection.

In vitro tests revealed a biocompatible nanoplatform with better dispersity than a nanoagent without metformin, and higher antibacterial activity.

“Compared to previous reports that used metformin as an antibacterial agent alone, excellent antimicrobial effects were obtained in our experiments using lower concentrations of nanosheets with a very short action time,” said Li, who has noted that they were also studying the effects of metformin in other biomedical applications to develop more therapies.

To further test the metformin-capped nanosheets, the researchers established a model of staph infection in the skin of mice. The mice were divided into five groups, each of which received a treatment variant. The group that received both the metformin nanosheets and supplemental hydrogen peroxide to promote hydroxyl radical production had the fastest healing rate, with complete closure by day 12 of treatment.

“This work not only develops an effective chemodynamic therapy nanoagent as an alternative antibacterial agent to treat skin wound infections, but also provides insights into finding new uses for old drugs,” Li said.

The National Natural Science Foundation of China and the National Young Talent Support Program have supported this work.

Nano-research is an international and interdisciplinary peer-reviewed research journal, sponsored by Tsinghua University and the Chinese Chemical Society. It offers readers an engaging mix of comprehensive, authoritative reviews and cutting-edge original research articles. After more than 10 years of development, it has become one of the most influential academic journals in the field of nanos. Quick review to ensure quick release is a key feature of Nano-research. In 2020 InCites Journal Citation Reports, Nano-research has an impact factor of 8.897 (8.696, 5 years), the total number of citations reached 23,150 and the number of highly cited articles reached 129, ranked in the top 2.5% of more than 9,000 journals academics, ranking first among China’s international academic journals.

SciOpen is a professional, open-access resource for discovering scientific and technical content published by Tsinghua University Press and its publishing partners, providing the scholarly publishing community with innovative technology and cutting-edge capabilities. SciOpen provides end-to-end services across manuscript submission, peer review, content hosting, identity analysis and management, and expert guidance to ensure the development of each journal in offering a range of options in all functions such as Journal Layout, Production Services, Editorial Services, Marketing and Promotions, Online Functionality, etc. By digitizing the publishing process, SciOpen broadens reach, deepens impact, and accelerates the exchange of ideas.

The title of the article