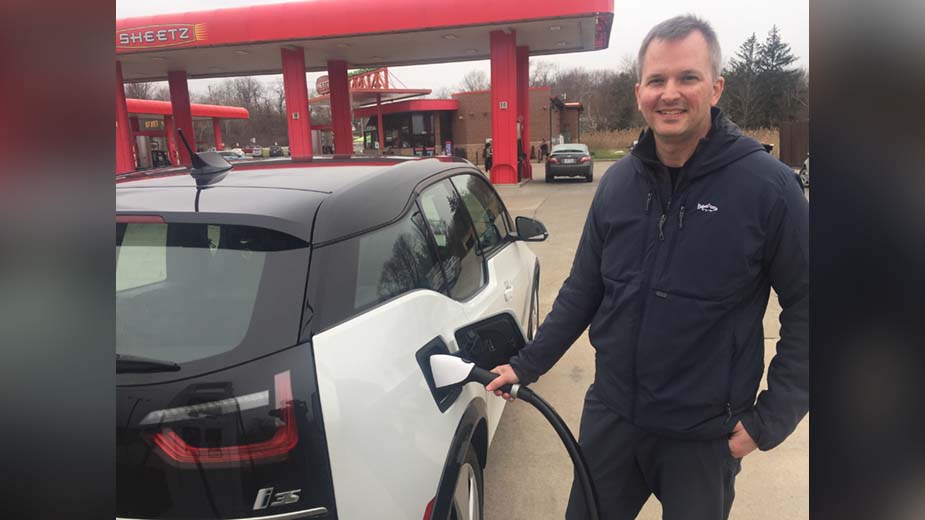 LORDSTOWN, Ohio – Bill Webster seems relaxed on a spring morning as he charges his BMW i3 EV – not a single trace or detection of “range anxiety” as he heads from Conneaut, Ohio, through the Trumbull County and back to Frederick, Maryland.

“These are great for road trips,” Webster says, looking at the screen of a six-foot-tall charging station set up in a Sheetz travel plaza along Salt Springs Road near Girard. It takes about half an hour to charge his vehicle until he’s comfortable to get back on the road.

He often travels from Maryland to Conneaut to see his father. He knows precisely where the public charging stations are thanks to the Plugshare application. “You just have to plan your trip,” he says.

On average, it will make four charging stops over the entire 350-mile journey, adding about two hours to the 5.5-hour drive it would normally take in a conventional gas-powered vehicle.

But Webster doesn’t care. He is completely convinced of the value and function of electric vehicles, noting that he has rented or owned one for a decade. The question he gets most often from others is how long can a driver travel on a single charge – a phenomenon known as “range anxiety”.

To this, Webster replies that people miss the point.

Apps like Plugshare help alleviate some of that uncertainty. Accessible via a smartphone, the app displays the pin locations of EV charging stations on a digital map of the entire country – each color-coded to indicate whether they are DC fast chargers or stations public low voltage.

The Sheetz near Girard, for example, hosts four DC fast-charging units developed by ElectrifyAmerica, each capable of servicing two vehicles. Customers simply insert a payment card and plug in. As the vehicle starts, a digital screen displays the cost and amount of charge delivered to the battery.

Webster says it costs him about $25 for a 350-mile one-way trip from Frederick to Conneaut. For a combustion engine vehicle – using an average fuel consumption rate of 25 mpg – it would cost more than $57 to travel the same distance based on current gas prices.

“It makes a huge difference if you have a short commute,” Webster says. Every evening after work, he simply plugs his vehicle into a 240 volt wall unit at home and charges the car overnight. “It can go from zero to 80 percent charge in about four hours,” he says.

According to Plugshare.com, there are 17 charging sites in Trumbull, Mahoning, and Columbiana counties. Of these, only three are designated as “fast” chargers. It’s a gap that local authorities and electric vehicle dealers would like to see closed in the coming years, as the adoption of electric vehicles accelerates the demand for additional stations.

It remains to be seen how well the Mahoning Valley will see from the national plan. DriveOhio is working on a statewide initiative that must be submitted to the Federal Highway Administration by August 1.

Meanwhile, local transportation specialists are working on recommendations to include in DriveOhio’s proposal, evaluating the most convenient locations for electric vehicle charging sites.

“We are providing data and developing a distinct plan for our region over the next five plus years,” says Grant Taylor, GIS specialist at the Eastgate Regional Council of Governments.

He says the team plans to assess areas of the region where vehicles are more likely to access these stations, such as freeway interchanges or densely populated areas. Among the most logical starting points is the section of Interstate 80 that runs from Girard to Cleveland, a corridor designated as “electric vehicle ready,” as evidenced by the Sheetz EV hub.

Other major sections of I-80 and I-76 are pending designation, he said.

One benefit for the Mahoning Valley is that many of the state’s major metropolitan areas, such as Columbus, already have robust EV infrastructure, Taylor says. This could convince planners to spread new investments in areas where access to EV chargers is limited.

“Our primary goal in developing our plan is to ensure that our communities are ready and able to implement any outcome of the statewide plan,” he says.

The WRTA recharge service is free to the public, he says. Two are located inside Gate C, while the third can be accessed at Gate A near the rear parking lot of the WRTA Administrative Offices.

“I saw at least one Tesla charging, maybe one [Chevrolet] Bolt,” Harris says. “In the past three weeks, people have used them 22 times.”

Last year, the WRTA received $30,000 in grants from the Ohio Environmental Protection Agency and injected $37,000 of its own funds to install the charging systems.

Last year, the City of Youngstown accepted a $60,000 OEPA grant that will help fund the installation of four Level 2 charging stations.

Two of those units are reserved for a vacant city-owned parking lot on Fifth Avenue near Fire Station No. 1, says Charles Shasho, assistant director of public works. The other two are planned for a small downtown parking lot where the Kress Building once stood along West Federal Street.

“It’s the slow loaders,” Shasho says. “We are looking to secure a design contract and will begin work this summer.”

An upgrade to the country’s charging infrastructure can’t come soon enough for EV enthusiasts such as Webster, who after Girard Sheetz departs for his next destination – another Sheetz station plotted on Plugshare just outside outside Pittsburgh – to refresh the battery of his BMW i3.

“This is my fourth electric vehicle,” he says, as he prepares for the next leg of his journey and gestures to his vanity license plate which reads “OUTFGAS.”

Pictured: Bill Webster of Frederick, Md., recharges the battery of his BMW i3 at the Sheetz near Girard as he returns home from visiting his father in Conneaut, Ohio.