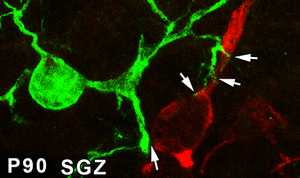 BUDAPEST (September 20, 2022)—The Laboratory of Neuroimmunology at the Institute of Experimental Medicine in Budapest (IEM), Hungary, led by Ádám Dénes, describes the presence of a site of direct interaction between microglial cells and the cell body developing neurons, and reveals its role in brain development. The finding may be important for developmental disorders affecting the nervous system. The study (https://doi.org/10.1016/j.celrep.2022.111369) presenting the results of the research has been published in the prestigious Cell reports newspaper of September 20, 2022.

The scientific community knows microglia as the main immune cell of the central nervous system and as the main regulator of inflammatory processes in the brain. The role of inflammatory processes and microglia is also increasingly recognized in neurodevelopmental disorders. The study of the role of microglia in physiological and pathological conditions has become a dynamically developing area of ​​research in recent years. The research group has accumulated a significant amount of knowledge in the area of ​​microglia-neuron cell communication, and several of their publications on this topic have received international attention. They discovered a new form of communication established by direct contacts between microglia and the cell body of nerve cells, called somatic microglia-neuron junctions, and revealed the role of these specialized contact sites in protecting neurons damaged by microglia. Although the important role played by microglia during brain development has been suggested by many previous studies, the exact cellular communication pathways through which microglia influence the development of neurons and the formation of neural networks in the brain are not clear. In particular, it was not well understood how and through what types of connections developing neurons that have not yet established interaction with other neurons in the absence of synapses can receive guidance from microglial cells to develop. in complex networks in the developing neocortex.

Among the members of Ádám Dénes’ research group, Csaba Cserép and her student Dóra Anett Schwarcz played an outstanding role in the implementation of the research program, with the additional contribution of István Katona’s research group to the EMI. During their investigations, the researchers used a combination of high-resolution molecular anatomy techniques, combined light and electron microscopy, and ex vivo imaging studies. Using a multifaceted approach, the researchers demonstrated the presence of direct connections between microglia and developing neurons both during embryonic development and after birth. “The special and dynamically changing anatomical connections between microglia and developing immature neurons are similar to previously discovered somatic microglial junctions in many ways, and their special molecular composition and ultrastructure allow microglia to continuously monitor and influence effectively the development and integration of neurons into complex networks,” said Csaba Cserép, the first author of the book.
When the researchers inhibited communication via key microglial receptors that are highly enriched at these sites, the development of the normal structure of the cerebral cortex was disrupted. Therefore, microglia should be considered an important regulatory cell type of brain development via these special interaction sites and beyond. “A deeper understanding of the microglial mechanisms necessary for proper brain development can help find new therapies for neurodevelopmental disorders and other forms of brain diseases that represent an unsolved challenge worldwide,” concluded Ádám Dénes , group leader, last author. of the publication.

About the Institute of Experimental Medicine, Eötvös Loránd Research Network:

The main objective of the Institute of Experimental Medicine is the exploration and understanding of the nervous system in order to increase our knowledge of the brain and to contribute to more effective diagnosis and treatment of neurological diseases, which represent an enormous burden. for the society. The Institute also strives to assist in the development of new brain research methods and technologies. Originally founded in 1952 to conduct biomedical research, the Institute has grown over the past 20 years to become Hungary’s leading neuroscience center and has now become a world-renowned neurobiological research institute. In addition to research, Institute staff play a major role in postgraduate training, teaching and course delivery at several universities, and educating the large number of undergraduate and graduate students. PhD working at the Institute to work with dedication and quality. Learn more about:

The Institute of Experimental Medicine: https://koki.hu/?lang=fr

The title of the article

The funding institutions had no role in the conceptualization, design, data collection, analysis, decision to publish, or preparation of the manuscript. The authors declare no competing interests.

Disclaimer: AAAS and EurekAlert! are not responsible for the accuracy of press releases posted on EurekAlert! by contributing institutions or for the use of any information through the EurekAlert system.