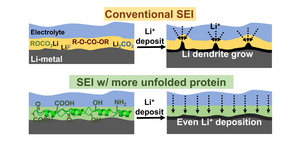 Formation and evolution of protein-modified SEI

Numerous studies focusing on the development of safe and long-term cycling lithium-metal batteries (LMB) have been reported. However, transferring these high-performance LMBs from laboratory scale to industrial-scale production remains challenging. Most LMB studies are limited to solving the problem of Li dendrite formation Going through a on the spot Where ex-situ layer formed on the Li anode, while the formation and evolution of solid electrolyte interphase (SEI), by mimicking the practical production process of LMBs, is rarely considered.

In it, the authors reported the formation of protein-modified SEIs on Li anodes at different shutdown temperatures. In addition, the evolution of protein-modified SEIs was studied by monitoring the duration of the arrest process. In particular, the evolution of the chemical components and the wetting behavior of SEIs modified with an electrolyte have been studied by controlling the conditions of the stopping process. It was found that the heat treatment used for protein denaturation led to more unfolded chain structures, which was confirmed by the simulation study. The resulting heat-treated zein-modified SEI (zein H-modified) demonstrated better wetting behavior and faster SEI formation than the unheated sample (zein U). Moreover, the symmetric cell Li | Li with zein H-modified SEI exhibited longer lifespan (360 h) than zein U-modified SEI (260 h). In addition, the symmetric LiFePO4/ Li cell with zein H-modified SEI showed more stable long-term cycle performance with higher capacity retention (70%) than cell with zein U-modified SEI (42% ) after 200 cycles. Therefore, high and stable formation rates could be achieved with H-zein-modified SEI after a short-lived quitting process. As a result, the Li anode with the H-zein-modified SEI achieved long-term stable cycling performance in symmetric Li|Li and solid cells.

The Energetic Chemistry Journal is a publication that primarily reports on creative research and innovative applications of chemical conversions of fossil energy, carbon dioxide, electrochemical energy, and hydrogen energy, as well as conversions of biomass and hydrogen. energy-related chemical problems to promote academic exchanges in the field of energy chemistry and accelerate the exploration, research and development of energy science and technology.

Disclaimer: AAAS and EurekAlert! are not responsible for the accuracy of press releases posted on EurekAlert! by contributing institutions or for the use of any information through the EurekAlert system.