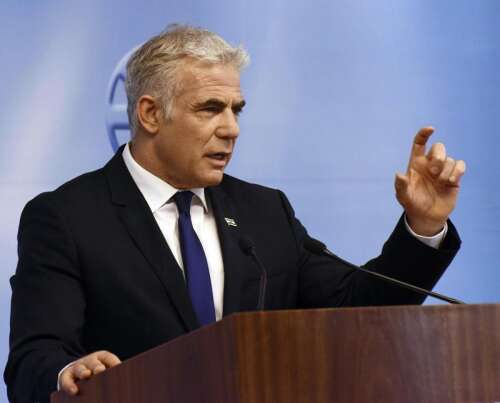 Yair Lapid made the comments after days of clashes between Israeli police and Palestinians at the disputed holy site revered by Jews and Muslims. The clashes came at a time of heightened tensions following a series of deadly attacks inside Israel, arrest raids in the occupied West Bank and rocket attacks on Israel launched from the Strip. of Gaza controlled by Hamas. It is the worst violence to rock the region since an 11-day war last year.

Speaking to foreign reporters, Lapid accused Hamas of ‘hijacking’ activities at Al-Aqsa Mosque during the Muslim holy month of Ramadan and encouraging young Palestinian men to throw rocks and fireworks on the Israeli security forces.

“They did this to create the provocation to force the Israeli police into the mosque” and start a regional conflict, he said.

Al-Aqsa Mosque is the third holiest site in Islam and an emotional symbol for Palestinians. It sits on a sprawling esplanade that is also the holiest site for Jews, who call it the Temple Mount because it was the location of biblical Jewish temples. Competing claims to the site are at the heart of the Israeli-Palestinian conflict and have sparked numerous waves of violence in the past.

The Palestinians have accused Israel of instigating the latest violence by allowing large numbers of Jewish pilgrims to visit the site. Last week, Jews celebrated the Passover holiday, a time when tens of thousands visit Jerusalem.

Under long-standing agreements, Jews are allowed to visit the compound, but they are not allowed to pray. But in recent years, a growing number of religious extremists have begun to pray quietly in violation of the rules, sometimes under surveillance by Israeli police. Palestinians fear that such actions are part of an Israeli plot to take over or divide the site.

Lapid denied those accusations, saying Israel is committed to maintaining the “status quo” on the site.

“There is no change. There will be no change. We have no intention of dividing the Temple Mount between religions,” he said. He called on allies to Israel in the Muslim world to “act against this fake news” and help calm the situation.

After Friday’s midday prayer, a small group of Palestinians waving Hamas flags marched in protest and attempted to break into an empty police station inside the compound. Israeli police used a drone to fire tear gas at them, sending crowds of people scattering across the plaza.

“During Ramadan, Israel made it possible for hundreds of thousands of Muslims to come to the Temple Mount and pray at Al-Aqsa,” Lapid said. “Despite the provocations of terrorist organizations, despite attempts to stir up violence: We have done and continue to do everything to allow peaceful prayer.”

Despite Israeli promises to protect freedom of worship, it has maintained restrictions that bar entry to the mosque to hundreds of thousands of Muslim Palestinians from the occupied West Bank and Gaza Strip. Israel says these restrictions are a security measure.

“The one who bears full responsibility for the explosion of the situation in Jerusalem and the Al-Aqsa Mosque is the occupation government, which brutally attacks helpless worshipers daily, prevents them from reaching Al-Aqsa and attempts to impose the project of Judaization,” he said.

The series of events in recent weeks have raised fears of a repeat of last year, when protests and violence in Jerusalem finally boiled over, helping to spark an 11-day war between Israel and Hamas and communal violence in mixed Jewish-Arab towns inside Israel. .

The rocket fire from Gaza in recent days has been the heaviest since last year’s war. None of the rockets caused any damage or injuries inside Israel, but they did set off sirens in parts of southern Israel and anger residents. A misfired rocket also landed inside Gaza on Friday, exploding near a UN house and school and lightly injuring two people, local officials said.

On Sunday, Israel closed its crossing point with Gaza, preventing some 12,000 Palestinians from going to work in Israel. Work permits have been an economic lifeline for thousands of families in Gaza and were seen as a key factor in maintaining stability before the latest fighting broke out.

The Gaza Workers’ Union accused Israel of imposing “collective punishment” on people who were not involved in the fighting. Israel has not said when it will reopen the crossing.

“A marae on paper”: the exhibition celebrates the 70th anniversary of the first issue of the Māori magazine

You can become a wok star in the kitchen