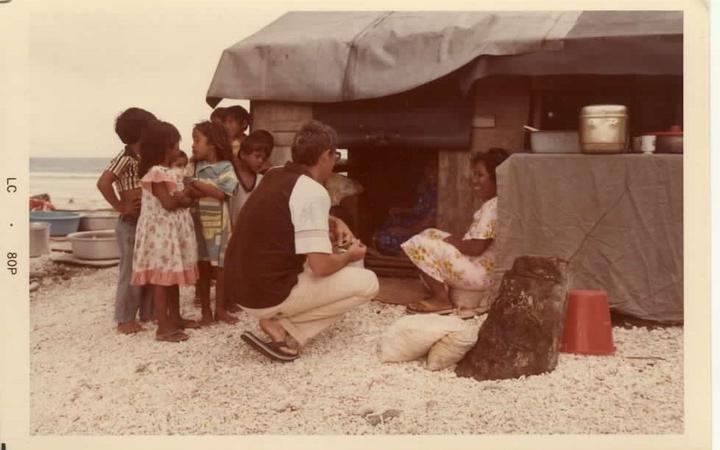 Micronitor News and Printing Company founder Joe Murphy shifted the goals of press freedom and free speech to the Marshall Islands, a country that had virtually no tradition of either another, by creating an independent newspaper which is today the oldest weekly in Micronesia. Region.

Murphy’s sharp intellect, fierce independence, vision for creating a community newspaper, bilingual language fluency and resilience in the face of adversity have seen him overcome obstacles – including waves of the high tide which in 1979 carried the printing presses out of the Micronitor building and onto the street – to successfully establish a print shop and newspaper in the difficult Majuro business environment of the 1970s.

Journalist Joe Murphy drew a crowd of children while conducting an interview for Majuro in the late 1970s.
Photo: Giff Johnson

Murphy, who died aged 79 in the United States last week, was the original skeptic, who reveled in political incorrectness.

At 25, he arrived in Majuro in the mid-1960s and was sent by the Peace Corps to Ujelang, the atoll of nuclear exiles from the Enewetak bomb tests that was a classic definition of the term “at the bottom from beyond”. A boat once a year, no radio, TV, telephone or mail. Yet Joe thrived as an elementary school teacher, surviving food shortages and hordes of rats, endearing him to a generation of Ujelang as an honorary member of the exile community.

After Ujelang, he concluded his two-year stint in the Peace Corps by taking over teaching an unruly public school class in the inner city after the previous teacher left. He rewrote what he considered a boring curriculum and taught in a military style, replete with chants in English.

These experiences in the pre-1970s Marshall Islands fueled her desire to return. After his Peace Corps tour, some time to travel the world, and a brief return to the United States, Murphy returned to Majuro. He didn’t have any money to speak of, but he had a vision and he decided to make it happen.

“He was determined to start a newspaper written in both English and Marshallese,” recalls Mike Malone, another Peace Corps volunteer who co-founded with Murphy what was initially known as “Micronitor.” At the end of 1969, they began to build a small newspaper building, mixing concrete and laying the foundation block by block with the help of some friends. Before the building was completed, however, they launched the “Micronitor” in 1970, printing from Malone’s home. Micronitor would later be renamed Micronesian Independent for a while before finding its identity as the Marshall Islands Journal.

Writing in the Journal in 1999, Murphy commented, “The 30th anniversary of this publication is something most of us who remember the Journal’s humble beginnings are surprised to see. February 13, 1970 was a Friday, an unlucky day to start a business by most reckoning, and the two guys running the operation were Irish extract liquor aficionados with very little or no newspaper experience. . no common sense, even attempted such a commendable undertaking. But circumstances and time were on their side, and with all serious potential investors avoiding such a dubious exercise, they had the opportunity to make a large number of mistakes without a willing competitor ready and willing to capitalize on them.”

With Murphy at the helm, it wasn’t long before the Journal was making a name for itself far beyond the shores of Majuro’s tiny Pacific outpost. Joe encouraged local writers and embellished the newspaper with pithy comments and attacks on the authorities of the Trust Territory of the United States and the Congress of Micronesia.

Joe Murphy in Majuro in the mid-1970s, a few years after the launch of the Marshall Islands Journal, which would become the longest-running weekly in the Micronesia region.
Photo: Giff Johnson

In the late 1980s and 1990s, Murphy built two bars and restaurants, local-style venues that appealed to Majuro residents as well as visitors. He also built the Backpacker Hotel, a modestly-priced accommodation that turned into a popular outpost for fisheries watchers awaiting their next assignment at sea, low-budget journalists, environmentalists, and various consultants.

“The first thing people think of when it comes to my dad is that he’s a very successful businessman here in the Marshall Islands,” said his eldest daughter Rose Murphy, who runs the business today. “But we must remember him as someone who wanted to give the Republic of the Marshall Islands a voice.”

“To say Joe was a unique person is an understatement,” said Health Secretary and former Peace Corps volunteer Jack Niedenthal. “He was an icon and had a profound impact on our country because he encouraged free speech and demanded that members of our government always be held publicly accountable for their actions.”

A plaque in his office defined his independent personality and his appreciation of the power of the press. He quoted the famous American journalist AJ Liebling: “The freedom of the press belongs to those who have one”. This was followed by a three-word comment: “I own one.” -Joe Murphy.

“He fought for free speech and fought against discrimination,” Rose said. “Regardless of race, religion and even status, he befriended people from all parts of the world and from all walks of life.”

In the mid-1990s, Joe created what has become the Journal’s justly famous motto, “The World’s Worst Journal.” It was a reaction to the more politically correct mottos of other newspapers. These three words have led to extensive international media coverage. In 1994, the Boston Globe conducted a survey of the World’s Worst Newspapers, reviewing a batch of newspapers that Murphy had mailed out. When the Globe reporter concluded that despite his claims, the Journal was not only not rated the world’s worst newspaper, but was “a first-class newspaper”, Murphy’s reaction was to say, “We must have sent you the wrong numbers.

The Marshall Islands Journal has come under scrutiny by the Boston Globe to determine whether editor Joe Murphy’s claim that the Journal is the “worst newspaper in the world” is accurate.
Photo: Giff Johnson

Murphy knew that the key to successful newspaper publication was not the quality or lack of packaging of the newspaper, or whether a photograph was in color. The most important ingredient of any successful local newspaper is original, intelligently written and interesting content. He did more than his fair share to animate the Journal, from its launch until poor health after 2019 prevented him from committing to the journal.

“My father experienced extreme hardship in Ujelang with his adopted Marshallese family, exiles from Enewetak Atoll, who were moved to Ujelang to make way for US nuclear testing in the late 1940s,” his wife said. pink girl. “He shared those struggles with his children to give them the perspective of being grateful for every little thing we had. If we had a broken shoe or a bit of food, he would share that story with us. Our father, for us, is a symbol of resilience and gratitude. Be resilient in difficult situations.

From growing up among eight children of Irish immigrant parents in the United States through the austerity of Ujelang Atoll to the early days of founding what would become the longest-running weekly newspaper in region of Micronesia, Murphy was indeed a symbol of resilience and independence, able to navigate difficult situations with alacrity.

One of the first editions of the Majuro newspaper in 1970, then known as Micronitor.
Photo: Giff Johnson

“Democracy was able to establish a hold, then a firm hold, in the Western Pacific, in part thanks to a handful of pioneering journalists who believed in the power of truth, especially Joe Murphy on Majuro,” Floyd K said, veteran Pacific Islander journalist. .Takeuchi. “He had the courage to challenge the powers that be, including those of the Chief, to be better and do better. People forget that for many years the long-term future of the Marshall Islands Journal was not Not sure. With each issue of the weekly, Joe’s legacy is reinforced in the islands he loved so much.

In Honor of Women’s History Month: Hold My Crown – Brave Women Share Stories of Resilience at the March 19 Book Launch in Arlington, VA

Beverley H. Johns – Welcoming the immunocompromised behind the mask