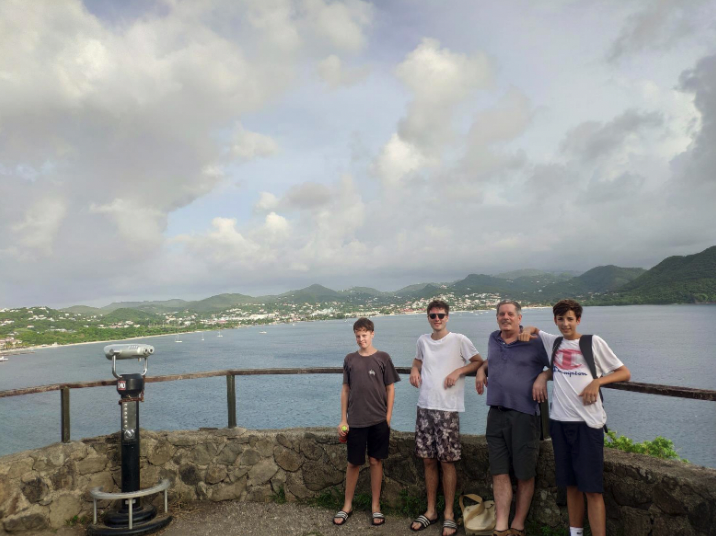 Martin Ellis with his three sons in Saint Lucia

A HIGH COURT judge in the tropical paradise of St Lucia must investigate the death of a man who was electrocuted in front of his children.

Martin Ellis, 68, who lived in Dartmouth Park, died while sightseeing at a dam on the Caribbean island in 2019. Now, three years later, a claim for compensation has been filed in the highest court on the island.

Three companies accused of being responsible by the family’s legal team all denied guilt and instead blamed themselves or claimed Mr Ellis was responsible, suggesting he was a trespasser.

Mr Ellis’ widow, Amy Silverston, told the New review that the fact that the case had to go to court only added to the grief and stress caused by his tragic death. The companies – Wasco, the Saint Lucia water board, Vinci, a construction company, and Weggo, a contractor, were all named in court filings.

Mr Ellis and his three sons were enjoying a fortnight on the island in August 2019, when they took a day trip to a nature reserve. After visiting the Sir John Compton Dam located in the rolling countryside in the center of the island and named after the first Prime Minister of Saint Lucia, a downpour forced them to take shelter under the overhang of a station dilapidated pumping.

Ms Silverston told the New Journal that the trespassing allegations were incorrect.

She said: ‘When the boys and Martin arrived at the dam they were given instructions by workmen. There was a low chain across a path and nothing else. Workers even told Martin where he could park his car. Only one warning sign was covered in foliage and dirt.

As the family stood sheltering from the rain, Mr Ellis went to the back of the hut to urinate – and was instantly killed by a high-voltage electric shock when he touched a pointing wire to the pumping station. Investigations later revealed that a live cable, intended to be buried underground, had been cut and left trailing at shoulder height, according to police reports – and it was ungrounded and touching a metal tube.

Mr Ellis’ sons Lucien, Tristan and Piers heard their father cry out in pain and rushed to see what had happened. They found him face down in the mud and faced the unimaginable horror of having to try to save their father’s life – although an inquest in London said he died instantly as a result. of the power of the shock.

His eldest son, Tristan, was also injured while trying to free his father from the wiring. Help took more than an hour to arrive.

Ms Silverston said: ‘Investigators have shown that the equipment at the pumping station has not been maintained for many years. Electricity had no earth rod. When you read their defenses, they all say it wasn’t their fault and try to blame each other. It’s almost comical – or would be if it weren’t so real.

The traumatic experience drastically changed the family’s life. Ms Silverston, who was diagnosed with multiple sclerosis in 2006, had stayed home while the boys travelled.

She told the New review that as well as losing the family’s breadwinner and Ms Silverston’s primary carer, the sudden bereavement has made her condition worse. She used to walk with aids and was able to work, but is now permanently confined to a wheelchair and employs full-time care.

She said: “Some of the things claimed have been pretty nasty. The defendants said they did not believe the boys suffered any trauma. A psychiatrist asked them if they had been affected. The answer is clearly yes. They have suffered a significant amount of trauma and suffer from PTSD.

An electrician’s report said the pumping station and electrical wiring were unsafe and needed urgent repairs, but the three defendants all filed legal documents denying liability.

Instead, they claim that Mr Ellis was acting in an ‘illegal and unsanitary’ manner ‘likely to harm public health’ by relieving himself near the dam, and that by breaking in they are therefore responsible for putting themselves in danger.

None of the three companies accused of being responsible responded to New review requests for an interview or comment In documents filed with the High Court, Vinci states that he was not at the dam at the time. He added that they were unaware of any danger and that the roadblock was closed to the public.

Calling the family “true authors of their own misfortune”, the da Vinci documents added that Mr Ellis had “failed to heed a chain of entry points, to heed a sign, to enter in a restricted area without supervision, authorization or invitation, and failing to take adequate measures”. precautions for their own safety.

Ms Silverston said: “His biggest long-term project was our boys. He was the antithesis of the pushy parent. He saw his role as allowing them to make up their own minds and go where that would take them. He was a real role model for the three boys. The couple had been married for over 30 years.

Mr. Ellis, worked in computer software design. Ms Silverston told the New review how, since his death, she and her sons have had to find new ways to cope.

She added: “They [the three companies] are all responsible for Martin’s death in different ways. “Here, there had been no maintenance of the pumping equipment contained in the small unmarked building. This lack of maintenance meant that there was no ground rod in the event of an electrical surge.

The site where Mr. Ellis died

“It was an accident waiting. If all parties had complied with basic building rules, Martin would still be alive.

Now lawyers working for the family are set to begin pre-hearing negotiations with the firms to see if common ground can be found. If no agreement is reached, the case will be taken to court within the next 12 months.

Attorney Jennifer Kelly, of Field Fisher attorneys acting for the family, said: “Given the devastating loss to the family and the significant psychological injuries suffered by Martin’s children, who attempted to save the life of their father using CPR and then witnessed his horrific death, the response of officials in Saint Lucia is shameful.

“We will continue to raise questions about electrical safety standards on the island and pursue justice for Amy and her three sons.”