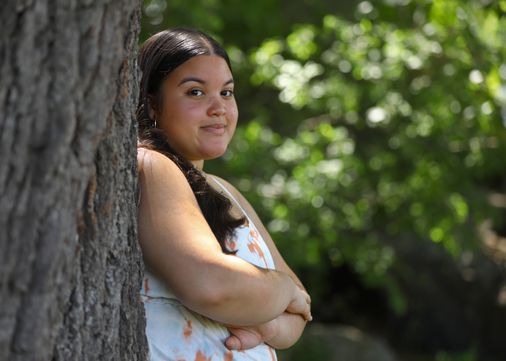 “I’ve been at Match all my life, so it’s just people who look like me,” she said. “It was a really difficult experience because we were surrounded by whiteness. … The whole curriculum was set up for an ideal student who is white, wealthy, who went to private school.

Charlotte could have just written an angry journal entry or complained in long texts to friends back home. But instead, she demanded change. She worked with other students of color to organize a peaceful protest and speak about their experiences at a faculty meeting.

“I’m a very anxious person, so doing that was so scary,” Charlotte said. “I had to get out of my comfort zone.

In interviews, Match educators drew on the protest as an example of Charlotte’s character.

“I feel like a lot of other students maybe gave in, because it was racism coming from authority figures,” said Charlotte’s former English teacher and soccer coach Jamica Legrand. . “She wouldn’t allow herself to do that. Instead, we were talking, and she was thinking of ways to help other students who also felt that way about talking.

Ashley LaCavalla, director of the high school’s colleges and careers office, said Match changed his policies about sending students to study at other institutions based on what he learned from Charlotte and a another student who had participated in the Vermont program with her.

“We’re stricter about who we recommend these schools to because they were definitely doing our students a disservice,” LaCavalla said. “It kind of changed our whole approach to semester schools.”

Charlotte’s mother, Yira Polanco, 41, said her daughter learned to be strong and empowered by watching the struggles and sacrifices her parents made as immigrants.

“She sees that we are working hard for her and her brothers,” Polanco said. “She is so smart. …She wants to do something better for [herself] and for everyone.

Now, Polanco said, her daughter inspires others to work harder — including her younger brothers, “and me, and her dad, everyone in the family.”

When Charlotte was about a year and a half old, her parents came to the United States to find work, while she stayed in the Dominican Republic with her grandmother, she said.

She was reunited with her parents in Boston when she was about 5 years old, and the family grew with the birth of her brothers, Ian, 15, and Ethan, 12. But when Charlotte was in fourth grade, her parents separated and she found herself living for three years with her mother and brothers in a run-down apartment that was part of a family shelter.

“Most of the time our lights and heating weren’t working,” Charlotte recalls. “I remember there were so many times, especially in the winter, when we had to sleep with the oven open to be able to get that heat because the heater wasn’t working.”

The family ate their meals in the church pantries and walked half an hour every morning to the school bus stop, even on the coldest winter days. When they couldn’t afford the storage unit where they had placed family photos and important documents, their belongings were tossed in the trash, she said.

Charlotte’s mother was unemployed when the family lost her home, but later worked as a waitress, then as a delivery driver for an online retailer, and now as a baggage handler at Logan International Airport. While working long hours, Charlotte was often at house in Mattapan acting as a second mother to her brothers: cooking their meals, playing with them and teaching them life lessons.

And Charlotte didn’t let her circumstances dictate her academic trajectory. In class — and on the football pitch — she picked up new lessons quickly, then stepped in and helped her peers understand, Legrand said.

“As a coach or a teacher, when you don’t have to tell a student or a player to do something, and they automatically understand what they need to do, sometimes it makes me wonder: ‘ Well, do they need me?” she said. “But also, it makes me very proud, because I’m like, ‘You don’t need me, and all my work is prepare for a world where you don’t necessarily need people to be successful.'”

Although known at Match for her advocacy for women’s rights and racial equality, Charlotte is an unlikely campaigner. In class, she rarely draws attention to herself. But when she feels someone is being treated unfairly, she sheds her placid facade and reveals her tenacity.

“Even when there was a problem this year with one of their teachers, she helped the other students organize a peaceful protest,” LaCavalla said. “She seems calm, but there’s a lot going on. Maybe that’s like the definition of an introvert.

Charlotte has been accepted into her “dream school,” Stanford University in California, and she’s counting the days until she heads west for a very different new chapter in her life. She is interested in studying neuroscience and improving access to quality health care for communities of color and immigrant populations.

Her mother is proud and thrilled that her only daughter has this educational opportunity, but she has mixed feelings, at best, about her living on a distant continent.

Parenting: How to Help Kids Have a Great Summer at Camp