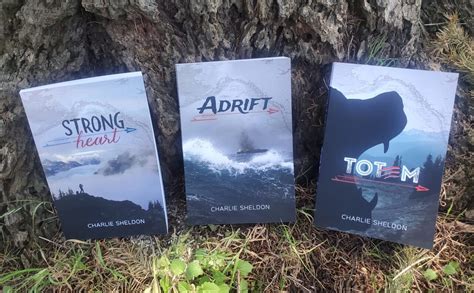 Manchester, Connecticut – January 18, 2022 – Totem, the final book in Charlie Sheldon’s Strong Heart trilogy, has been named Book of the Month for February 2022. Picking up the story the summer after the series began, it follows Sarah, her family and friends as they return to the park one last time before mining begins. There they meet a wildlife biologist investigating strange elk kills around the perimeter of the park. In a conversation with Sarah – an official OnlineBookClub.org interview – author Charlie Sheldon said, “The overall story explores a conflict between some local families and a proposed mining operation…but they are also stories of coming of age, survival and great mystery. »

Totem concludes not only the trilogy, but also OnlineBookClub.org’s collection of Book of the Month accolades. Strong Heart, the first in the series, was named Book of the Month for October 2017. Adrift, the second installation, won the title in April 2019. In an official OnlineBookClub.org review of Totem, VerniVi wrote shortly before awarding the book a perfect score of 4 stars: “Preceded by Strong Heart and Adrift, this last part ends the story perfectly. [It] shows a well-documented scientific background regarding the history of mining and the northwest that forms the foundation of this story. Steeped in history, one of the best things about this tale is how it advocates keeping traditions alive in an ever-changing world. I found that to be one of the most important messages in the book.

OnlineBookClub.org is on its way to its sixteenth anniversary, having amassed over two million subscribers along the way. The forums include book reviews, general discussions, conversations focused on specific books, and interviews with over a hundred authors. Its OBC Reader application, released on October 31st, 2021 by OnlineBookClub.org founder Scott Hughes is one of his most recent creations for book lovers.