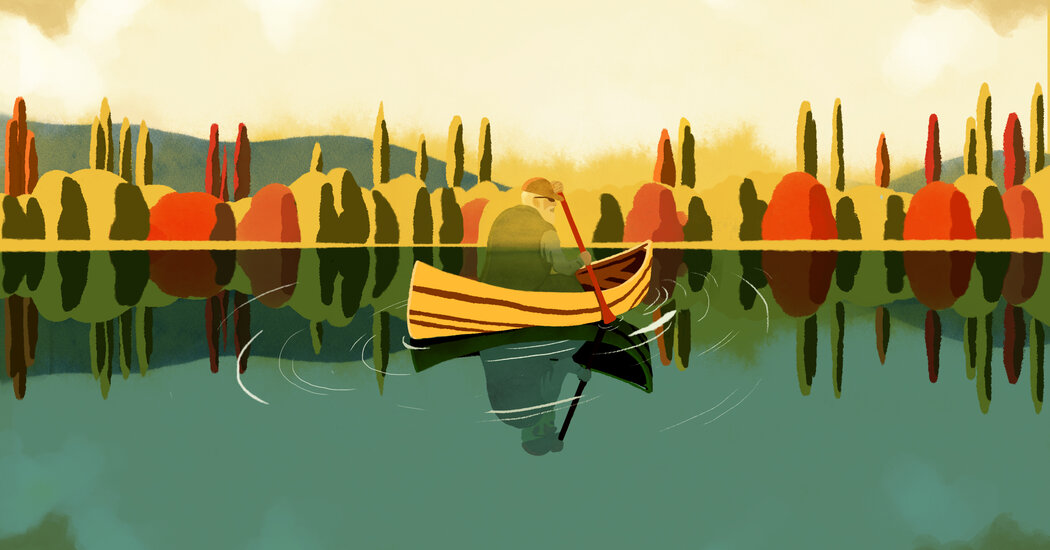 A second book runs beneath the surface of “Riverman” like an undercurrent, and hints at why McGrath is so drawn to Conant’s story. At a time when everything is constantly online and the real world is increasingly mediated by screens, Conant and his canoe represent something slower and quieter, closer to nature. “In idle moments,” writes McGrath, “between calls, I would gaze out the window at the broad Hudson, where the barges glided back and forth in the distant channel, and I would begin to think of our village of Piermont less as a satellite of the huge economic engine downstream than as part of a network of hundreds of small towns in an upside down river nation: the United Riverbanks of Conant.

McGrath likes that Conant seems indifferent to publicity. He is socially gregarious, an inveterate collector of people and experiences, but remains indifferent to cultivating his own legend. Which doesn’t mean he doesn’t keep copious notes. McGrath’s investigation is aided by Conant’s impressive self-documentation: photos, diaries, emails and letters, most of which are hidden in storage lockers in Montana and Utah. All of this gives McGrath a safe path to follow, and his efforts to retrace Conant’s footsteps amount to a kind of immersive journalism, where to understand his subject, he inhabits his world and his worldview.

This world is not always happy. For all his logistical and physical abilities, Conant is also homeless and psychologically haunted, worried enough about the possibility of diabetes and gout to plot his river routes to ensure he can find a VA hospital when he needs one. A bright student who served as his high school’s junior class president and voted the “perfect” senior graduate in his yearbook, he now lives mostly on pickled hot dogs. He hasn’t seen anyone in his extended family for years. He craves human contact but avoids forming close ties, always alert to “the slightest trace of grimace or half-second hesitation” which could signal that he has exhausted his welcome. He tells his friends he still dreams of settling down and talks fervently about a girlfriend out West, but McGrath’s efforts to track her down go nowhere. it seems likely that she is more fantasy than flesh. Adrift in life, Conant seems to have let himself drift on rivers in part to escape a society where he was seen as “a misfit rather than a hardy charmer”.

‘Well, I have to die of something. Frankly, I wouldn’t mind croaking on a trip like this.

Yet the life of an affable river wanderer suits him. Time and again in his reporting, McGrath finds people who remember Conant fondly after their brief encounters, who went out of their way to help him, and who describe the powerful effect he had on their imaginations. McGrath spells it all out in poised and elegant, almost circumspect prose. When his personality shines through irrepressibly, the effect is unexpected and delicious, as with the ironic parenthesis that closes this passage on Conant and the modern world: “If he had been born later, I thought he would probably have blogged, or posting his works on Instagram, along with photos of cantilever bridges and morning mist (#riverlife).

Mostly, however, and to his credit, McGrath has the good sense to stay in the shadows, to ensure that the main persona on the page belongs to Conant. And what a personality it is. In his quoted diary entries, Conant has a strong, distinctive voice, well suited to his eccentric folk-hero personality: “There is a fine line between a man of exceptional courage and a fool,” he wrote to a occasion. On another: “Well, I have to die of something. Frankly, I wouldn’t mind croaking on a trip like this.