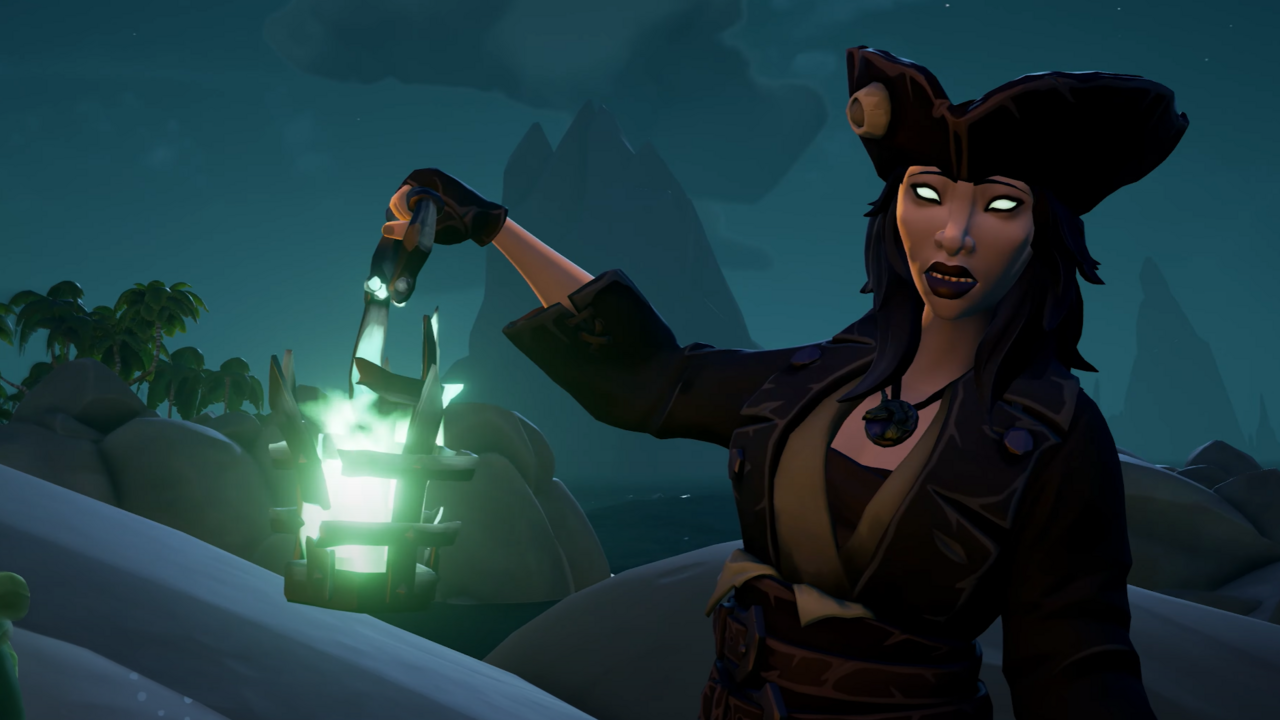 Sea of ​​Thieves Adventure 5, The Forsaken Hunter, is out now. In this one, you’ll follow the steps of the game’s most beloved shark hunter. He’s gone missing and if you don’t find him soon, he might lose his seat on the Ferry of the Damned and be lost forever. . This Sea of ​​Thieves adventure is live from June 30 to July 14, so you’ll need to complete it within that two-week window if you intend to complete all actions and earn all cosmetic rewards, called Reminders. With this complete Forsaken Hunter guide, you will complete the story mission, find all the journals, and complete all the acts, which in summary will unlock all the limited time rewards. Cast off the sails and follow us.

Stage 1: Talk to Larinna, then navigate to Stephen’s Spoils

All adventures so far have started with a conversation with Larinna who stands outside the outpost where you spawn. Talk to him for start the adventure and she’ll tell you to head to Stephen’s Spoils, Merrick’s usual hangout spot, located on map grid L15.

Step 2: Collect “A Letter for Merrick” from Stephen’s Spoils

Although Merrick isn’t there – no surprise – a note left for him will be next to his cauldron at the end of the dock. Read it and you’ll have your destination – assuming you know one of Sea of ​​Thieves’ secret islands.

Stage 3: Navigate to the hidden island at the K9 map grid

Although not on your ship map, there is an island at location K9, or as the letter says, halfway between Shipwreck Bay and Hidden Spring Keep. Sail there next and dock next to Belle’s ghostly buoy when you arrive.

Belle will seem distraught as she too is looking for Merrick. She fears that if he’s not found soon, he’ll be lost forever, as the Ferry of the Damned is what gets the pirates back from the dead – but don’t lose their seat, and Merrick could be in danger. Belle will give you two items: the Tattered newspaper and Belle’s Lantern. Both will be added to your radial menu, so don’t worry about misplacing them.

You’ll find new pages of this diary as you go, but for now you’ll have at least the first few pages, including an illustration of your next stop: Vagabond’s Refuge at map grid F12. Sail there, then dock near the beach on the north side.

Raising Belle’s lantern on the north beach will reveal a spooky scene playing out in front of you. The masked assailant will moor his boat and head inland. With the lantern continually raised, follow their footsteps. You’ll come to a scene where the masked assailant (now MA) is writing in his diary. Next to them is a journal different from the Tattered Journal in your hands. This is the first of five entries you will need to find as part of the Forgotten Diary. Be sure to read this journal to complete a later act.

Keep following the MA after reading Forgotten Journal #1 and they’ll lead you down the path to Wanderer’s Refuge Cave. Hidden between some rocks is the entrance to Wanda’s hideouta location you may have visited during previous Tall Tales in the game. Interact with the skull on the table to open a nearby locked door.

As you follow the tracks, another memory will play out in front of you. Once it’s over, follow the MA out of the cave. Look for them to pause and write in a journal under a small grove of trees. This is where you will find Forgotten diary #2.

Keep following the MA after that and you’ll come back to a memory where they bury something in the sand. Dig where they did and you find more tattered diary pagesbringing your total to 5/10 pages.

Your new journal pages will show your next two locations, but we’ll keep it simple. Head to Sailor’s Bounty (C4) and Salty Sands (G3) and get ready to fight. At each location, you will need to defeat ghosts. Whichever island you visit second, you’ll receive new Tattered Journal pages, so you can access them in either order. From Wanderer’s Refuge, Salty Sands is slightly closer, so we’ll assume you stopped there first.

On Salty Sandsyou can pick up Forgotten diary #3 by landing on the south beach and again following in the footsteps of the MA with your special lantern. Look for the MA to stop and write nearby on this small island. Keep following the MA to find ghosts to send back to a watery grave.

Likewise, when you are on Sailor’s Bountyyou can pick up Forgotten diary #4 using Belle’s Lantern on the eastern beach of the larger central landmass and retracing the steps of the MA to a rock formation littered with skulls. Keep following the MA to find the ghosts that need to be dealt with.

Whichever island you visit last, killing ghosts will also reward you with two more tattered diary pagesbringing you to 7/10 and the The Ghost’s Orders quest item.

Next, you’ll want to visit Cannon Cove (G10), as the new journal pages indicate that’s where the story continues. On Cannon Cove, you’ll face more ghosts, so stock up on food and ammo. Dock on the west side of the island and use your special lantern to trace the MA’s footsteps until you catch them writing Forgotten Journal #5 – the last such journal entry – near the camp not to be missed.

Keep following the MA until you encounter more ghosts. After a scene has played out, they’ll be looking for a fight, so give it your all. When the last one is defeated, you can pick up another of the The Ghost’s Orderswhich in turn will also give you 8/10 Ragged Journal Entries.

The last log says you’ll head to the newly restored Golden Sands Outpost (D10), which is the next island west of Cannon Cove. Quay to the northwest and head to the weapon shop where you will find a grade rejected on the ground. It will actually be your the last two pages of the Diary in tatters, thus completing one of the Acts. If you’ve grabbed all of the Forgotten Journal entries, you’ll have found all 15 in the adventure and won’t have to worry about ignoring any more.

With the full story in your hands, return to Belle and catch up with her with everything you’ve learned. Choose from continue the adventure in the dialogue options and you will be on the last chapter of The Forsaken Hunter.

Stage 10: Navigate to the Sea Dog Tavern and confront the Masked Assailant

Your final mission will be underway. Navigate to Sea Dog’s Tavern (RIP Arena mode) at map grid location K11. Head to the dock at ground level to find the Masked Assailant and watch another story sequence unfold. The masked assailant will reveal his identity – which we won’t spoil here – before you learn of Merrick’s twisted fate. With this, you will have completed Sea of ​​Thieves Adventure 5, The Forsaken Hunter, while completing all deeds and earning both keepsakes.

GameSpot may earn a commission on retail offers.

The products discussed here were independently chosen by our editors. GameSpot may get a share of the revenue if you purchase something featured on our site.

Taylor Swift: is the singer engaged to her boyfriend Joe Alwyn?