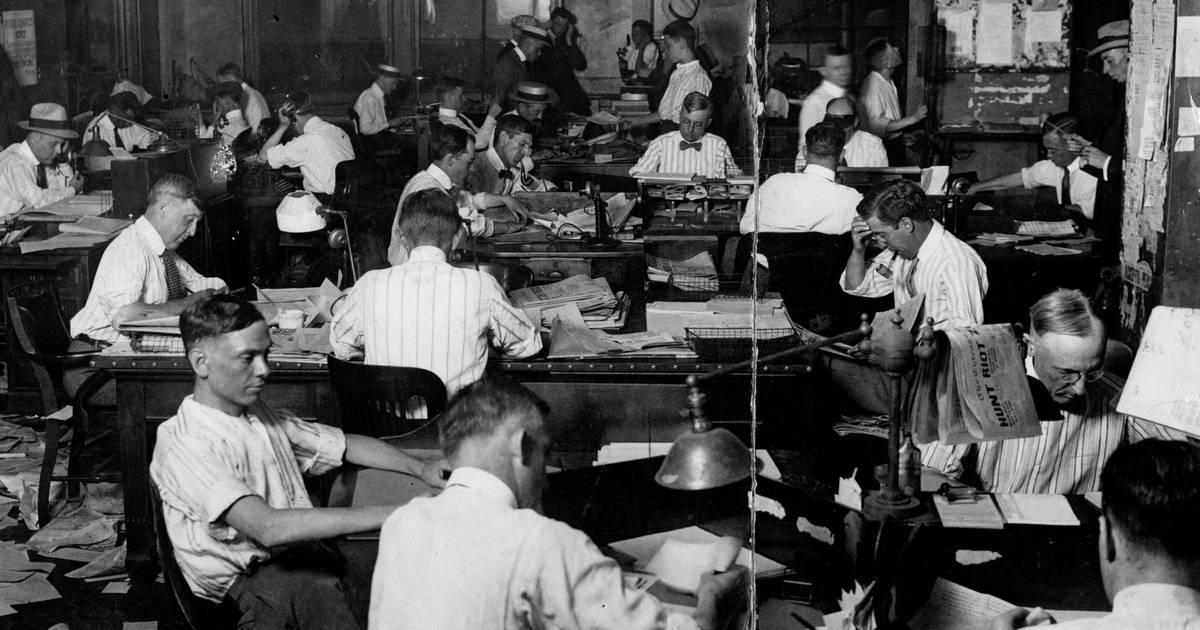 A newspaper is, of course, not a living thing.

It is, by his humblest definition, ink on paper, and it has been that way for a very long time. For the Chicago Tribune, that period began on June 10, 1847, and over the next few Sundays we’ll trace that newspaper’s 175-year history.

It is, of course, a lot to bite into, as it is a story that unfolded against the backdrop of this remarkable city. Chronicling Chicago, along with the “outside” world, has created a colossal stack of Tribune pages, full of triumphs and tragedies, oddities and oddities, events and people both wondrous and wild.

I hope to surprise you with things you might never have known, enlighten you and even amuse you. Curious to know how the newspaper covered the St. Valentine’s Day Massacre? The White Sox’s first game? Would you like to know, for example, what role the Tribune played in the creation of “Little Orphan Annie” or how the infamous “Dewey Defeats Truman” came about?

Who coined the phrase “world’s largest newspaper” after calling the Tribune simply “Chicago’s largest daily”? When did the famous “Injun Summer” appear and when, and why did it disappear? What does the newspaper call “the most beautiful office building in the world”?

I hope some of you will remember the past headlines and the writers and photographers who were once part of your daily life, as well as those who still work to bring you the news today. Others, we hope, will remember that a newspaper plays a vital role in building community, fostering debate on important issues and political decisions.

Journalism is, it has been said to the point of cliché, the first draft of history. There have been other definitions, of course, the one offered by the city’s 48th mayor, Richard J. Daley, who said, “A newspaper is the lowest thing there is.

When the Tribune was born, Chicago was in its infancy, having been incorporated as a city a decade before. Its streets were loud and noisy, but many of its approximately 17,000 citizens could see that the city was building rapidly, although no one could predict its future.

On the day the newspaper was born, 400 copies were printed and sold for three hundred each. The four-page publication contained little news and few opinions, and these essentially existed to take up space between advertisements.

The streets are now cobbled (no less noisy), but the essence of how news is gathered and delivered, even in the face of mind-boggling leaps in technology, remains the same as it always has been: getting the story and the send to readers.

The ways in which this has been accomplished have changed over the decades – although always with an emphasis on speed – and the means by which the information is gathered have also changed. Indeed, even the notion of what constitutes information has been frequently redefined. But the birth of the Tribune coincided perfectly with a time when the world was rapidly shrinking, making information about people and events more easily accessible and transmitted more quickly.

La Tribune shared the history of this city and, in a way that might surprise you, it also helped to shape this history and you will find out how. You’ll learn about some of the strong personalities who guided the paper – including Joseph Medill, William Bross, Joseph Petterson and the larger-than-life Robert R. McCormick – and see how the paper covered the city’s world fairs and gory gangsters , mayors and ladies, the birth of the skyscraper and the flights of Michael Jordan. Yes, the city would exist without the Tribune, but I’m glad the newspaper was here, and remains here, to tell its stories.

I was chosen to write these stories, I guess, because I’ve written a lot of stories about the city’s past. Also, my history with newspapers, and this newspaper in particular, is deep. I’ve worked here for over three decades, but every member of my family has called this publication home.

My mother, then Marilew Cavanagh, first entered this building in the summer of 1937. She had just turned 18. She did a lot of stuff at the newspaper, working in the travel department, the fashion department, writing movie review synopses. , write memos, and handle many tasks for various topic editors.

She also got to know the boss at the time, Colonel Robert R. McCormick, who took a liking to her and often asked her to walk the dog – a German shepherd, Lotta, so named because she had lots of puppies – which he brought with him to Tribune Tower every day. “The Colonel was a presence,” she told me. “And he scared everyone half dead.”

She left the tower shortly after marrying her first husband in 1940. When she did, an inside publication devoted half a page to the event. Under a headline that read “Marilew’s wedding saddens boys in editorial” were the signatures of dozens of editors and reporters.

A signature that did not appear on this page was that of my father, Herman Kogan, who had started working night shifts as a tower rewrite man in 1939 and so only met the woman who was to be his wife and my mother only years later. He left the newspaper and the city to fight in World War II as a correspondent for the Marine Corps, then worked for the Sun-Times and the Daily News.

My younger brother Mark worked here as an intern and editor for three summers in the early 1970s while attending the Medill School of Journalism at Northwestern University.

I grew up in a home and at a time when newspapers were held in high, almost holy esteem. This was reflected in what I saw and read as I entered the lobby of the former Tribune house in the riverside tower, a quote from the playwright Arthur Miller carved into the wall: “A good journal, I suppose, is a nation that speaks to itself.

My first story appeared in this newspaper on January 21, 1973. I started contributing stories regularly in 1985 and was hired a few years later as a full-time employee. I have written thousands of stories for the newspaper, and through this series I will attempt, with the extensive collaborative efforts of my colleagues Marianne Mather, Kori Rumore and Jocelyn Allison, to combat the urge to indulge , to self-expand and thump his chest. . I’ll strive for something that isn’t hagiography, but instead offers you subjective highlights (and a few lowlights) of the diary’s past.

As Lloyd Wendt, distinguished journalist and contributor to my father’s many books on Chicago history, wrote in his masterful 1979 book, “Chicago Tribune: The Rise of a Great American Newspaper,” “The Metropolitan Newspaper never sleeps, never rests, but writes his autobiography in daily book-length segments.

Before coming to the Tribune, I worked for the Daily News and the Sun-Times, and the Daily News comes to mind now. The great writer/editor MW Newman penned the paper’s eulogy, a piece of lyrical journalism that began on the back cover of the paper on March 4, 1978 and ended thus: ‘The newspaper of the writer ends as he began – a momentous book of life. But this story is not over, just the part of the Daily News. A newspaper dies, but the journaling goes on. Life goes on, the sequel and all the tomorrows after that.

You might be reading this on a computer or a phone or maybe the old-fashioned way with ink on paper. However it is brought to you by the last gathering of hundreds of people working every day to give you various forms of the Tribune, and hundreds of thousands of you still read it. It is a story worth telling. The point, I guess, is that strong, energetic journalism is not a luxury but an essential, however delivered.

Newman was right, of course. Tomorrows await, but now is the time to revisit yesterdays.

Follow with all our 175th anniversary cover and sign up to receive a special edition of Daywatch in your inbox with a birthday cover.