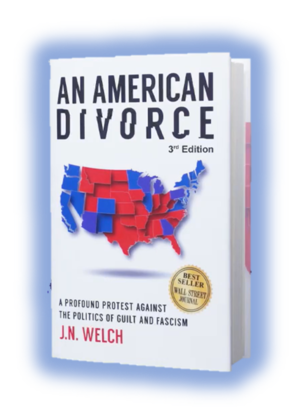 WARNING! Because of the controversial content of this book, AN AMERICAN DIVORCE is written under the protection of anonymity by the best conservative and sociopolitical minds of our time.

LOS ANGELES, CA, March 15, 2022 /24-7PressRelease/ — Is the United States facing a societal “divorce”? Are we on the verge of a second civil war? Two-thirds of Americans think such an event could happen in the current political climate. Is the answer a “two Americas solution” to remedy its democratic dysfunction? An American Divorce goes beyond the sweeping arc of political correctness to address issues and topics that can no longer be debated in the public forum or mainstream media.

Is America inherently racist or has academia been complicit in brainwashing millions of Americans into believing that the United States should only be judged in the context of guilt and privilege? An American Divorce provides the answers to these polarizing questions.

This provocative book describes how the United States can move beyond the democratic paralysis created by liberal academics and radical left-wing agitators, and provide a mass movement roadmap for those black, brown, and white Americans who desire desperately to live in a country that embraces First Amendment rights AND that won’t be dictated by a screaming minority steeped in identity politics and cancel culture.

As the nation reels from a global pandemic, political/economic uncertainty and racial unrest, An American Divorce is essential reading for all Americans hoping to move beyond hatred, division and dysfunction and chart a new course for a country. in great peril.

For more information and to schedule interviews, visit: anamericandivorce.com

Women’s basketball: UNM draws against Grand Canyon in first round of WNIT